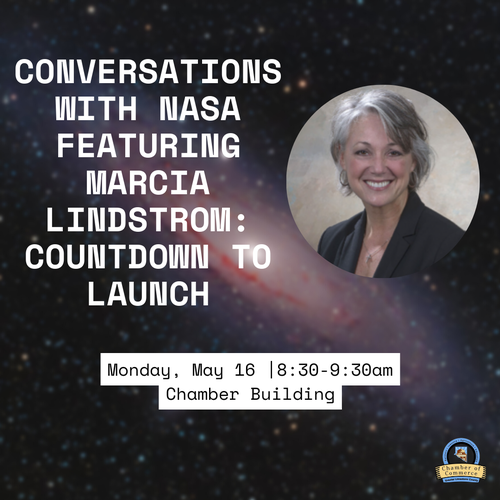 Event Description:
NASA’s Space Launch System, the world’s most powerful rocket, is the backbone of Artemis lunar exploration and is essential to returning humans to deep space. Mrs. Lindstrom will discuss the Artemis I launch and will provide information on the progress NASA has made, and is continuing to make, for future Artemis missions and the goals/objectives for these missions.

Prior to her role as lead of the External Relations Office, she served as the Communications Strategist for NASA Headquarters, leading the agency’s efforts for large-scale events. Marcia came to NASA after more than a decade of work at the U.S. Space & Rocket Center in Huntsville, Alabama. Her tenure at the U. S. Space & Rocket Center involved development efforts such as restoration of the Saturn V and included a six-year stint as the Director of Operations for the Center’s world-renowned Space Camp programs. Marcia is a veteran of the United States Air Force.
Location:
Chamber Building
101 South Beaty Street
Athens, AL 35611
Fees/Admission:
Free to Attend.
Set a Reminder:
Business Directory News Releases Events Calendar Job Postings Contact Us Join The Chamber